If you had one wish, what would you wish for?

Each person must have something that they really desire or want to achieve, if you haven’t worked out your one, let’s take a look the other people’s wishes in our digital story If You Had One Wish

Isn’t it amazing? Listening to these beautiful people talking about their wishes, sharing their thoughts? It is like you can enter their inward worlds and then realize the beauty of them. Some wishes were simple as to live forever; some involved the remarkable depth of humanity. No matter how theirs wishes are different, but the smiles on their faces are same. I found myself was smiling along while I was editing the footages too, I was affected by their yearnings of their wishes, and then I realized the real thing that has driven us to live and going forward is – the hope.

For this short film, me and my group mate Darren collected and filmed the answers from 15 people who were with different background and from different countries, and integrated them into one story. Many skills that we have learnt in the first semester of Graduate Diploma of Media were used for making the film, such as the photo and sound editing, creative writing etc.        In the process of production, I also have realized the importance of collaboration in fimmaking; I have really enjoyed working with Darren who is with great skills and kind personality, we working together in a structured way, innovating together, and finally made it happen, it is the best price for us. It is important mentioning that the concept of If You Had One Wish was inspired by videos on fiftypeopleonequestion.com which are all compilations of fifty people’s answers and reactions to only one question. We also intended to present our story onto fiftypeopleonequestion.com and some mainstream social websites like Youtube, Vimeo so that it could be brought out to the world by them; we definitely want the world to see it. Also we submitted it to ACMI to have it screened, so hopefully it will get the result we are expecting.

Lastly, great thanks to all the people who helped us to finished our digital story, you guys are amazing! May all your wishes come true!

Knowing Audacity from flipped lecture is really a big help for me to edit sound, I have Adobe Audition on my computer but I never bother to use it, because I get freaked out by its interface all the time. I’m not a sound expert so I won’t need 90% functions of Adobe Audition, and I failed to find software that meets my needs until today. In the past, I mostly relied on the sound editing function which is built in Adobe After effect, again it is powerful but I always ended up getting too many layers just for sound. Along with all the footage, it is a disaster on my small laptop screen. The lecture also interested me in Garage band, which I could use to compose my own background music for the following short film, but it is a shame that I haven’t got a Mac.

This is comparison of interfaces of Adobe Audition and Audacity, I know Audacity doesn’t look as cool as Audition, but it simplified all the functions I don’t ever need in the size of 8 Mb, thumbs up for that.

Next I would like to do a test on one of the voice files that I recorded for my documentary project referring to Audacity video tutorials part 1 and 2 on flipped lecture.

After I set up the preferences and imported the sound file, first thing I have to do is to cut off the unnecessary part and reduce the back ground noise. I got lost on the cutting part so I went through another tutorial ‘Audacity Cut Music’ on YouTube, and finally I have got the part I want.

Since we were recording this in a noisy cafeteria, the background noise is real pain in the neck, after several tries on getting the noise profile and adjusting the removal settings, I have got the final result done, although it is still with a bit of noise but it is much better than before.

And then export it as MP3, done!

The first experience with Audacity is fresh, some of the shortcuts work different with Adobe software, but overall I think Audacity is able to perform basic audio editing and format transfers in an intuitive way that many beginners have no trouble understanding. And it’s free!

I like drawing when I was a kid, and I still do.

Drawing on a computer is different; it involves less emotional expression but more precision. I remember how I felt uncomfortable when I started to use a stylus to draw things on the screen. However, after I gradually picked up the skills, I started to like digital drawing and even developed an own way to draw, which I took advantage of skills of traditional drawing. I personally like using Photoshop (bitmaps) because it is more capable of handling various properties’ images, and even creating complicated visuals for things like 3D imitation, photo montage, photo grafting, etc. And it performs much better with stylus, because it has accurate perceptions of pressure from the pen point. To put it simply, it could imitates hand drawing experience. But bitmaps are resolution dependent, it’s difficult to increase or decrease their size without sacrificing a degree of image quality.  It means when you reduce the size of a bitmap image, you must throw away pixels. When you increase the size of a bitmap image, the software has to create new pixels. When creating pixels, the software must estimate the color values of the new pixels based on the surrounding pixels, but it may distort the image. Conversely, vector graphics using the graphics function to record the color, size and other attributes. Zoom in and out of any object, no image distortion and will reduce quality. And it won’t affect the file size. So I commonly use Illustrator (vector) to create any text-related design, logo design, 2D animation design, which frequently requires different sizes of a same image to apply to certain conditions. Here are two graphic design works that I did in past study maybe could help you understand two types of graphics:

This set of vector clown characters that I designed which I reused in a following animation project, relies on the vector’s ‘unchangeable’ attribute. I was able to change their sizes without losing the qualities.

This one was archived by tracing the pre-scanned hand drawing outlines with stylus, and filled in the colors in Photoshop.

I just had my 4 widgets added to my blog, they can be viewed on the left side of the page.

1. Category Cloud: Display my most used categories in cloud format.

This is my first time using Google Alerts, and I think it is a good way to timely get needful updates in Email. It is especially useful for users who want keeping current on a competitor or industry. I personally have set up three alerts which are about PS4, RMIT, and iPhone, by the time I received the alerts next day, I was surprise by how the information has been sorted out clearly in order of importance and time. I like how it allows users to make more specific search terms by multiple words. One thing that I wish it to be improved is it could have more frequency options of alerts for users to select, rather than only sending daily and weekly. I think Google Alerts makes its users have the initiative to only get information they interest, so then they won’t waste their time on unnecessary messages compares to traditional mediums like newspaper and TV.

Today,  SFX has been developed to a high level, and it has been commonly applied in film or TV productions. However, Michel Gondry(1963-, a French film director) still adheres to primitive special effect techniques to create video productions instead of digital SFX.

‘Let Forever Be’ was directed by Gondry and utilized ground-breaking video and film effects in its depiction of a young woman’s nightmares. The video, which drew much visual inspiration from primitive special effect techniques such as,duplex photography and substitution trick etc. Gondry ingeniously linked each irrelevant scene to one dramatic long shot in the uses of these techniques.

Just a interesting stop-motion animation that I want to share~, enjoy! 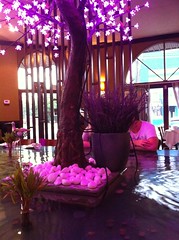